Fairytalez.com » Blog » The Power of Three: Why Fairy Tales Often Feature a Triple

The phrase “Once upon a time” is something you’ll often find in a fairy tale, however, there’s another common element that you may’ve noticed in these rich stories. The pattern of three is all over fairy tales and folklore originating from various regions, but have you ever wondered why? “Somebody has been at my porridge, and eaten it all up!” Illustrations by Arthur Rackham. Published in English Fairy Tales by Flora Annie Steel (1918), MacMillan and Company.

There’s actually a name for this writing choice, and it’s known as “the rule of three” or “the power of three.” This technique is used throughout all forms of entertainment, including comedy. Have you ever watched a show and noticed they often do three jokes, especially if it’s slapstick comedy? That’s the power of three. You can also see three in marketing slogans and in advertising, but nowhere is three more apparent than in fairy tales. 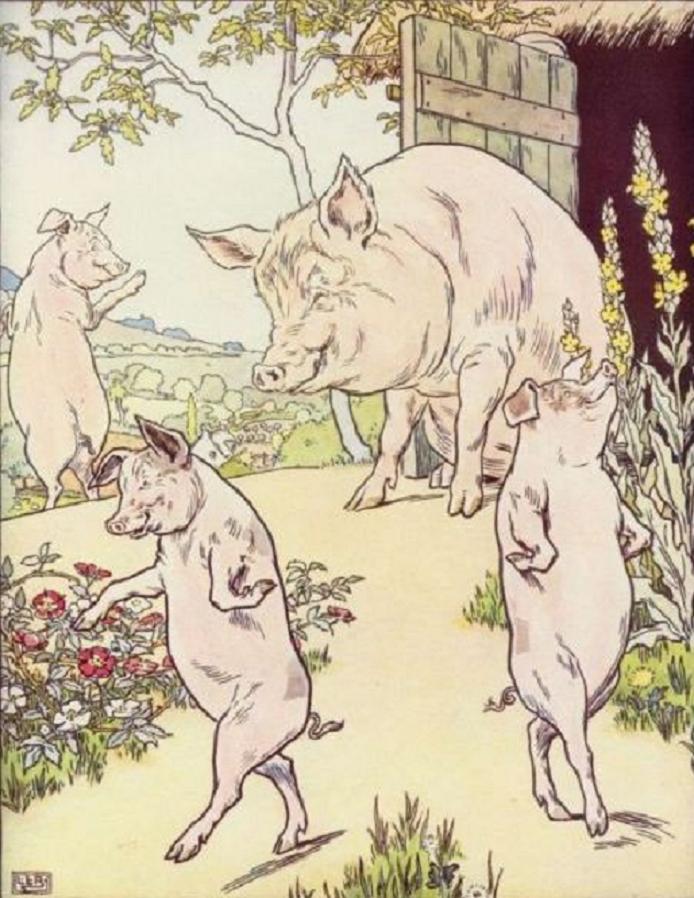 “Once upon a time there was an old Sow with three little Pigs, and as she had not enough to keep them, she sent them out to seek their fortune.” Published in The Story of the Three Little Pigs (1904), Frederick Warne & Co.

Let’s remember that fairy tales originated from the oral tradition, when storytellers would tell stories, and eventually, scholars and historians would write those down. These story collectors included Hans Christian Andersen and The Brothers Grimm, however, there are even more fairy tale authors, and many used the power of three. Having characters undergo three tests or trials makes for good suspense-building, such as when Rumpelstiltskin gives the queen three tries to guess his name. The pattern of three can also illustrate the personality of characters. In fairy tales, families typically have three daughters or three sons, and often, two of the children are lazy, cruel, wicked, and other “negative” qualities. The third child is the hero of the story, the one who’s rewarded for their goodness, or cleverness.

Another reason why the pattern of three is common in fairy tales and folk tales is to make it more memorable to those who heard the tale. Fairy tales were told from person to person, and having groups of three is a handy memory device for the storyteller to recall of the elements of the story. It doesn’t matter how long ago you heard the story of Cinderella, you probably remember that she had two evil stepsisters, don’t you? That’s the power of three at work.

We can examine the use of three in different ways. In psychology, experts believe that 3 plays a big part of persuasion, which is probably why Snow White’s stepmother came back three times to try to kill her, and finally succeeded on the third try! In terms of religious themes, three is a common element in virtually every religion, such the trinity of Christianity, and more. It’s important to note this, since so many tales have religious tones.

What Comes in Threes?

In fairy tales and folk tales, nearly anything can come in groups of threes. For instance, three can be the number of children a woodcutter has, or how many animals are present in a group, such as the Three Little Pigs. Three can also be the number of magical gifts received, such as those by Cinderella: a pair of glass shoes, horses and a coachmen who were formerly rodents, and a pumpkin that becomes a carriage. In Maid Maleen, the main character speaks to three things: a nettle-plant, a foot-bridge, and a church door, while in East of the Sun, West of the Moon, the girl in search of her husband receives three gifts. As you can see, three is just as common in fairy tales as towers and enchanted animals!

Listen to The Three Little Pigs, The Three Bears, and other stories of three in audio in the Fairytalez Audio Book App for Apple and Android devices.

Here are a few more stories that feature groups of three:

The Story of Three Wonderful Beggars
The Three Apprentices
Three Chests: The Story of the Wicked Man of the Sea
The Three Enchanted Princes

11 Responses to The Power of Three: Why Fairy Tales Often Feature a Triple