Whether you’re interested in participating in our writing competition or just want to try to tell your own story, we’ve got you covered with a handy guide as to how to write a fairy tale. "They saw that the cottage was made of bread and cakes." Illustration by Kay Nielsen. Published in Hansel and Gretel and Other Stories by the Brothers Grimm by Kay Nielsen (1925), George Duran and Company.

Are you ready to write a fairy tale, fable or folk tale? These stories for children and adults have been popular for centuries, and we’re proud to share so many here on Fairytalez.com! Whether you’re interested in participating in our writing competitions or just want to try to tell your own story, we’ve got you covered with a handy guide as to how to write a fairy tale.

What is a Fairy Tale?

A fairy tale is a short story that typically has elements of fantasy, such as dragons, fairies, ogres, elves, and gnomes. Most fairy tales have magic as well, with wishes, curses, spells, or charms featured in the story. The word “fairy tale” is used for all kinds of stories, not just those with fairies, and comes from Madame D’Aulnoy term conte de fées. You may think you can use folk tale and fairy tale to mean the same thing, but a fairy tale is actually a folk narrative. Folk tales will be more about real people and everyday things while fairy tales are more whimsical.

Fairy tales began first in an oral form, told from person to person, and sometimes acted out in a dramatic fashion. Researchers believe that fairy tales date back more than 2,000 years, and yet, we still love these types of stories today. Passing tales down orally from generation to generation continued throughout cultures, and eventually, the tales were transcribed for posterity in books by authors like the Grimm Brothers. 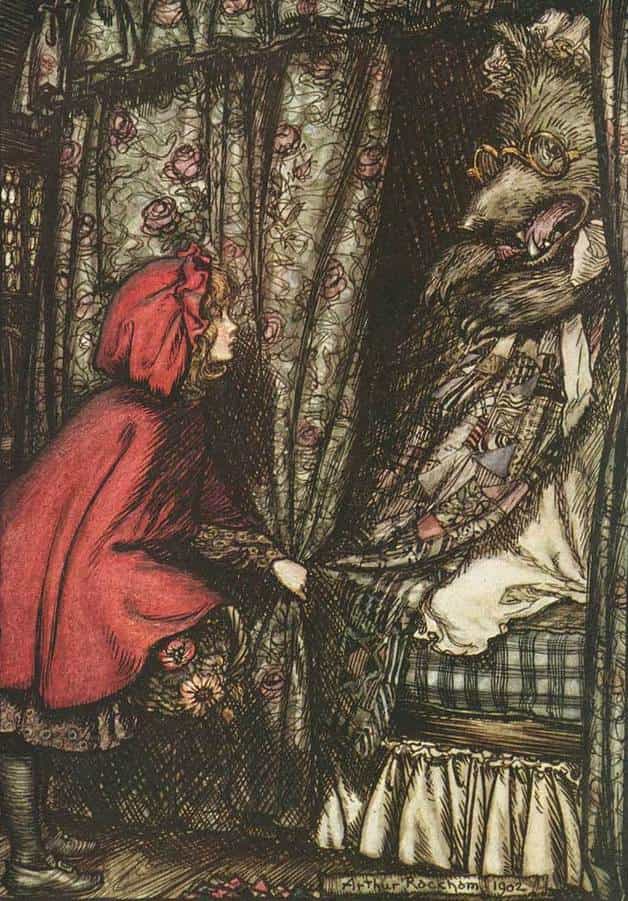 “Oh grandmother, what big ears you have got, she said.” Illustration by Arthur Packham, published in Grimm’s Fairy Tales by Wilhem and Jacob (1909), Constable & Company.

The Brothers Grimm were collectors of fairy tales, and were enthusiastic about folklore. Jacob and Wilhelm Grimm would invite storytellers to their home, and record the tales; their work was eventually published as Kinder- und Hausmärchen, or Children’s and Household Tales — today it’s more commonly referred to as Grimms’ Fairy Tales. Hans Christian Andersen is another fairy tale author and his stories include The Little Mermaid and The Fir Tree. Editor Andrew Lang collected fairy tales from around the world for his Color Fairy Books, but he only scratched the surface of the fairy tale world.

As there are so many fairy tales and folk tales from around the world, scholars have devised systems to classify the stories. The Aarne-Thompson-Uther classification system classifies fairy tales by motif, with options like Supernatural Wife, The Clever Fox, Stories About a Fool, etc. The ATU system helps group together variants under one common motif.

You’ll also find fables at Fairytalez! These are short stories that teach a lesson or mural, and feature inanimate objects (pots) or animals. The most famous fable author is Aesop, and his name is attached to hundreds of fables.

When you write a fairy tale, you may want to include common traits of these stories. Reading through popular fairy tales like Hansel and Grethel, Cinderella or Snow White, you will often see the same themes or patterns. These traits can include…

Tips and Advice on How to Write a Fairy Tale

Stuck on how to write a fairy tale? Don’t worry, everyone gets writer’s block, and you can get out of by following some of these tips.

If you want to submit your own story, sign up for an account on Fairytalez so you can start publishing your tales and enter our upcoming writing competitions.

12 Responses to How to Write a Fairy Tale: Writing Magical Stories