Classified as a story of “unjust oppresion and triumphant reward,” Cinderella is a story that’s remained popular for centuries, though you may not know that there are other variations of this story all over the world. It’s a story of a poor girl stuck in the cinders who finds love and wealth with a handsome prince. Cinderella. Her tale has leapt beyond literature to everyday use, with the term “Cinderella story” a common part of our language, used when someone goes from “rags to riches.” Cinderella has appeared on television, in movies, and in books for years and has consistently remained popular Classified as a story of “unjust oppression and triumphant reward,” Cinderella is one of the world’s most beloved fairy tales.

{You can read even more Cinderella stories in our book Cinderella Tales: International Cinderella Stories and Fairy Tales, now available in Kindle and paperback. You can also hear the Cinderela story in audio on the Fairytalez Audio Book App for Apple and Android devices}

The plot is simple: A girl, often dressed in tattered clothes, is made to be the cinder maid when her father remarries a wicked woman. The new stepmother has two daughters she dotes on, and these are poor Cinderella’s “wicked stepsisters.” The poor girl isn’t allowed to go to a ball, but she receives the chance from a fairy, and meets the prince but leaves before he can find out her name. He then tries to find her, led only by a slipper she leaves behind. These are the most common elements of the tale of Cinderella, though you may not know that there are other variations of this story all over the world.

Cinder-Maid shook the tree and the first nut that fell she took up and opened, and what do you think she saw?—a beautiful silk dress blue as the heavens, all embroidered with stars, and two little lovely shoon made of shining copper. And when she had dressed herself the hazel tree opened and from it came a coach all made of copper with four milk-white horses, with coachman and footmen all complete.

The Many Versions of Cinderella Around the World

The story Cinderella has been known by many names. Aschenputtel in German, Cendrillon in French, Cenerentola in Italian. Researchers believe there may be over 800 versions of Cinderella around the world, with origins dating back as far as 850. The earliest documented European version was by Giambattista Basile in his collection Lo cunto de li cunti (The Story of Stories), also known as Stories from the Pentamerone.

Author Charles Perrault’s Cinderella is probably the most well-known version, and is the version that still inspires adaptations today. Perrault added the fantastical elements we’re familiar with today, and his version still captivates us. The Perrault version, Cendrillon, features the fairy godmother who transforms a pumpkin, mice, a rat, and a lizard into carriage and coachman. She also gives Cinderella a magical dress from rags. This version would inspire filmmakers, with Georges Méliès making Cendrillon in 1899, and animators charming audiences with Walt Disney’s Cinderella in 1950. It’s at the Intermediate level and is read in just 13 minutes.

The Brothers Grimm also have a popular, yet more gruesome, version of Cinderella. The Grimms’ Cinderella, Aschenputtel, features the motherless heroine go from beloved daughter to hated servant when her father takes a new bride. Her father asks what he can bring one day back from the fair, and the two stepdaughters ask for riches, but Aschenputtel only asks for the first branch that knocks her father’s hat. She plants the branch near her mother’s grave, where she weeps so much that a tree grows in the spot. From the tree comes a little white bird who throws down whatever she wishes. The little bird and his friends help her do her chores, and even give her a magnificent dress for the ball. The rest of the Grimms’ Cinderella follows the same pattern as most Cinderella stories, with the prince looking for the maiden who left her slipper – in this story, the slipper is golden, and the stepsisters result to drastic measures to get the slipper to fit. It’s an Intermediate 15 minute read.

This Irish version of Cinderella is authored by M. Damant, and is from Folk-Lore: A Quarterly Review of Myth, Tradition, Institution, and Custom, vol. 6. In this tale, Cinderella is known as Ashey Pelt, and she has a magical black ewe. The ewe tells her to strike a stone three times, and she’ll get what she wishes. Her dream is, of course, to go to a ball, and the magic lasts until midnight. She leaves her silk slipper and the prince is determined to find the girl to whom the footwear belongs. The ewe tells him where he may find the maiden when he visits Ashey Pelt’s home and meets the stepsisters. This Cinderella tale from Ireland is an Easy 2 minute read. 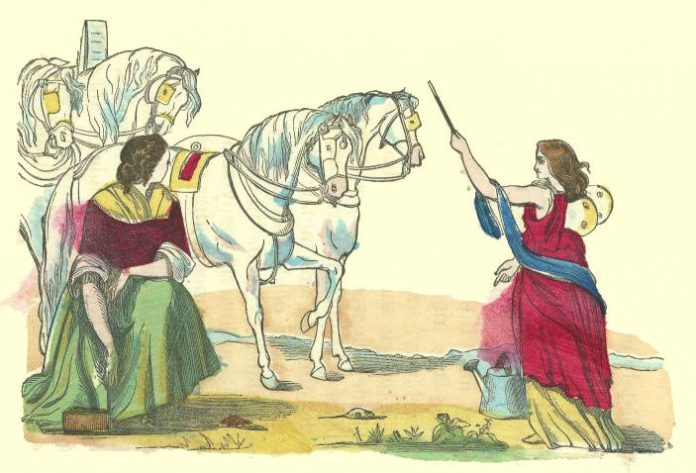 “As each mouse came out she struck it with her wand, and it was immediately changed into a beautiful horse; so that she had now six splendid grays for her gilt coach.” Illustration by Anonymous, published in Little Cinderella (year unknown), Brown, Taggard and Chase.

Katie Woodencloak is sometimes referred to as Katie Woodengown. It’s a Norwegian Cinderella tale gathered by Peter Christen Asbjørnsen and Jørgen Moe in Norske Folkeeventyr, also known as Popular Tales from the Norse. Here the Cinderella character, Katie, befriends a dun bull who helps Katie find food and survive her stepmother’s maltreatment. The stepmother plans to kill the dun bull once she realizes the animal helps the girl, but the duo get away. She goes to work in a palace, wearing a wooden cloak the bull gives her, and eventually meets the prince. She teases him and refuses to tell him where she comes from, but he eventually gets her golden shoe. A quest in the kingdom lets him find the maiden whose foot will fit the shoe. For Cinderella fans who want a longer story, the 27 minute Intermediate read is a delight.

The Greek version of Cinderella, Little Saddleslut begins with a ghastly start as Cinderella’s sisters kill her mother to dine on her flesh. Cinderella refuses to join in on the macabre meal and buries her mother’s bones. She smokes the bones with incense for 40 days, after which she finds a treasure of garments and coins in the bones’ place. She visits the church, flinging money about, and on one visit, she sees the prince. The prince wants to make her his wife, and uses her forgotten shoe to find her. This story is an Easy 8 minute read.

The Cinder-Maid is the Cinderella tale collected by Joseph Jacobs, and published in Europa’s Fairy Book. The tale has been described as the author’s “reconstruction,” as Jacobs put together several versions from across Europe, and wrote his own analysis. The story has similarities to the Grimms Cinderella, and is a 13 minute Advanced read.

Collected and published by author George Scott Douglas, Rashin-Coatie is a Scottish fairy tale sometimes referred to as Rushen-Coatie. Here the Cinderella character wears a coat made by rushes, and like the Bulgarian Cinderella, a magic cow helps her with fine garments to meet the prince. It’s a short and enjoyable tale to read in 6 minutes at the Intermediate level.

Published in Sixty Folk-Tales from Exclusively Slavonic Sources, by A. H. Wratislaw, this version of Cinderella features a character named Mary, and nicknamed Pepelezka by her stepmother. In this Cinderella tale, the heroine’s mother isn’t dead, but instead turned to a cow because Cinderella drops a spindle. The cow aids her in her plight and is like the fairy godmother of other tales. The Intermediate tale can be read in 11 minutes.

Cenerentola is from Italy and was published posthumously by Giambattista Basile. The story comes from his collection of folk tales, Lo cunto de li cunti (The Story of Stories), or Pentamerone, also referred to as Stories from the Pentamerone. The tale is set in Italy, and features magic performed by the Dove of the Fairies. It’s a 12 minute read at the Advanced level.

Published by Zófimo Consiglieri Pedroso, The Hearth-Cat is a Cinderella story from the collection Portuguese Folk-Tales. Here a girl’s father marries the local schoolmistress at the girl’s request, because the school mistress has promised to be kind to the girl and give her porridge with honey. Her father eventually marries the schoolmistress, but every time he’s not around, the stepmother treats the girl poorly. Three fairies help the poor girl giving her three special gifts, and goes to the races. She leaves behind a slipper which the prince picks up, and he goes to find her. This Portuguese fairy tale is an Advanced read in 10 minutes.

Another Irish Cinderella tale, Fair, Brown and Trembling was collected by Jeremiah Curtin for Myths and Folk-Lore of Ireland and is about three sisters, daughters of King Aadh Cúrucha. The first daughter is named Fair, the second is named Brown, and the third is named Trembling. Trembling is the most beautiful of the three, and her sisters fear she will attract all of the men with her beauty. She goes to church urged by a henwife, wearing fine clothing that the woman gives her. Trembling visits the church and catches the eye of all there, and mistakenly leaves a shoe behind. This Irish version has a great deal more detail, and is an 19 minute Intermediate read.

We’re adding new fairy tales all the time, and we will add even more versions of the fairy tale Cinderella. For now, we hope you enjoy these great renditions of a beloved tale.

You may also sign up for our Weekly Fairy Tale newsletter to receive a new tale every week. We promise we won’t send spam!

21 Responses to Cinderella Tales: 10 International Versions of the Beloved Tale